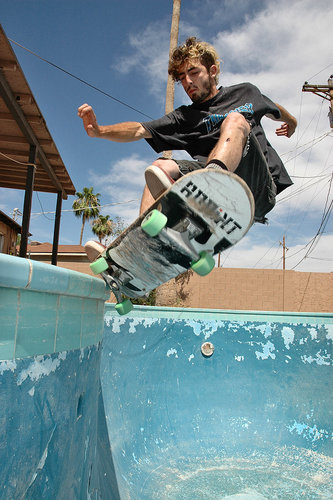 Many people got their first glimpse of backyard pool skating in the 2002 documentary “Dogtown and Z-Boys,” the director Stacy Peralta’s paean to the Southern California skateboard scene of the 1970s. A record-setting drought had emptied pools throughout the region, and imaginative locals found that they made awesome skate parks, though often illegal ones. In Mr. Peralta’s telling, the skills the riders honed in those backyard arenas led to the rise of vert skating, begetting a new generation of skate heroes and ultimately the X Games.

Three decades later pools across the state are bone dry again, this time thanks to thousands of foreclosed, abandoned homes. With all those empty backyards has come a resurgence in the sport and, over the last three years, the rise of a new kind of skater film, one that looks and feels nothing like “Dogtown,” now a classic.