Science and Technology: The Love Bot 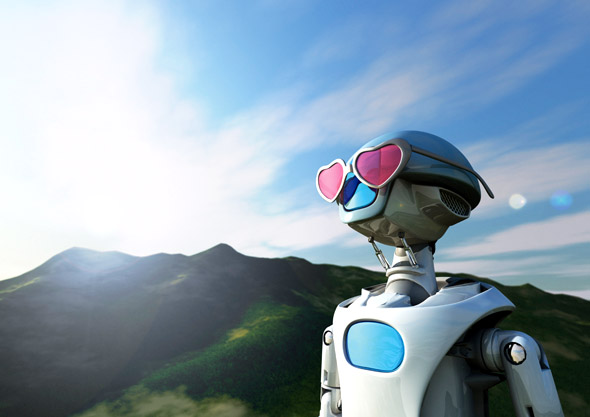 The robot is smiling at me, his red rubbery lips curved in a cheery grin. I’m seated in front of a panel with 10 numbered buttons, and the robot, a three-foot-tall, legless automaton with an impish face, is telling me which buttons to push and which hand to push them with. Touch seven with your right hand; touch three with your left.

The idea is to go as fast as I can. When I make a mistake, he corrects me; when I speed up, he tells me how much better I’m doing. Despite the simplicity of our interactions, I’m starting to like the little guy. Maybe it’s his round silvery eyes and moon-shaped face; maybe it’s his soothing voice—not quite human, yet warm all the same. Even though I know he’s just a jumble of wires and circuitry, I want to do better on these tests to please him.

The robot’s name is Bandit. We’re together in a tiny room at the Rancho Los Amigos National Rehabilitation Center in Downey, Calif., where Bandit regularly puts stroke victims through their paces. They’re very fond of him, says researcher Eric Wade, who has worked with Bandit and his predecessors for five years. They chitchat with him, chide him, smile when he congratulates them. “People will try to hug the robots,” says Wade. “We go out to nursing homes, and people ask, ‘When’s the robot coming back?’”