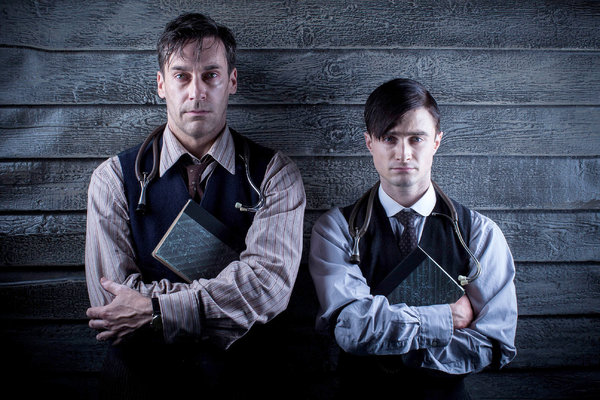 In the coming mini-series “A Young Doctor’s Notebook,” Daniel Radcliffe plays a man fresh out of medical school who is sent to run a hospital in a remote Russian village in 1917. He is called upon to saw off limbs, deliver babies and prescribe salves to a never-ending queue of syphilitic peasants, but this inexperienced doctor has help: His older self, played by Jon Hamm, pops in from time to time to offer medical advice and swipe morphine from the dispensary. Their relationship, if one can call it that given that they’re the same person, is a strained one, shifting between combative and testy to Oedipal. At one point, the two share a tub.

“I did. I got to take a bath with Jon Hamm,” Mr. Radcliffe said, speaking by telephone from London. “I got to wrestle him, and throw a punch at him, too, which was all fun.”