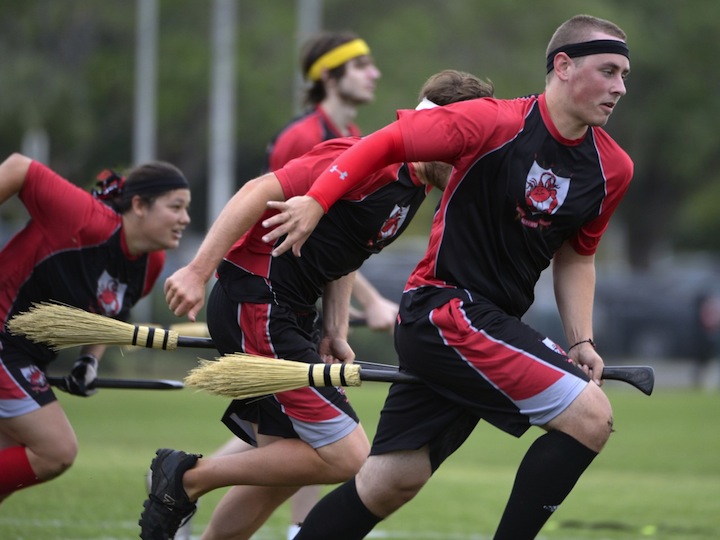 “The Weird Popularity of Real-Life Quidditch”

It’s the second day of the Quidditch Western Cup, and two players, one male, one female, have just collided on the field. Both are flat on their backs, neither one moving, so the EMT walks over to take a look. After a minute or so, one player sits up, her face pink as a bad sunburn; the other is still thinking about getting up, but hasn’t quite yet. It was a brutal, high-speed smack, but nothing one wouldn’t see at any hard-fought soccer match, except for the fact that the two combatants weren’t even playing in the same match. One of them, it seems, had come flying into the other from an adjoining field. And then there are the brooms—yes, brooms—which, moments before impact, both players had been gripping between their legs.

Welcome to the wild and weird sport of Muggle Quidditch, where boundary lines are suggestions, four balls are in play at any given time, and every player—except for the elusive golden Snitch—dashes about with large, bristly broomsticks held mid-thigh. Six years ago, the game was just a cool idea hatched by a group of students at Vermont’s Middlebury College; today, there are more than 700 teams on high school and college campuses worldwide. Adapted from the high-flying sport popularized in the Harry Potter books and movies, the earthbound version boasts a governing body (the International Quidditch Association); a smart, funny magazine (“The Monthly Seer”); a World Cup competition, which, last year, drew 20,000 spectators; and an ever-expanding base of players and fans from San Diego to Seoul.